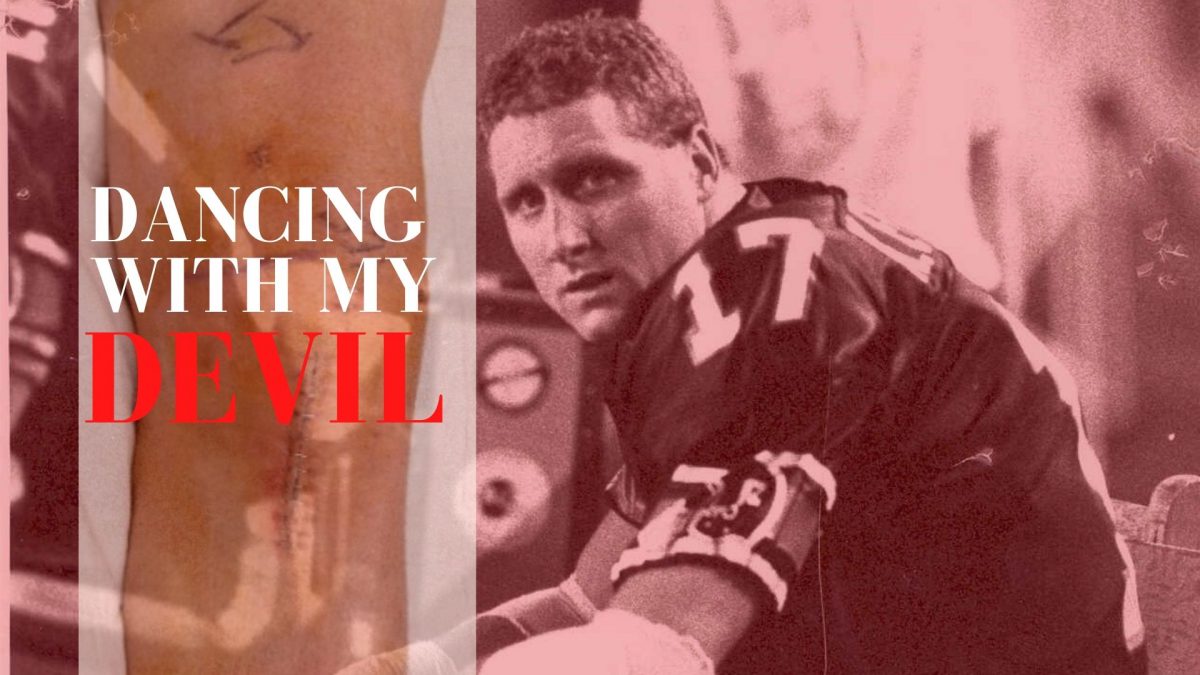 In what had become a reassuring habit I developed over a 2 ½ year span, I was trying to count the number of lights in the surgical lamps stationed above me in the operating room before the anesthesiologist knocked me out.  The answer on this day was 55. There I lay, prepped for surgical procedure number 5 on my left knee. All part of an effort to get back into the game of pro football. The first procedure, the major repair of my torn ACL and meniscus, took place on Monday October 18th, 1993. All thanks to a less than heroic moment one week earlier on the Toronto SkyDome field as a member of the Hamilton Tiger Cats.  It began with my brief chat with Toronto Argonaut receiver Jeff Fairholm as we went out for our pregame warm up.  He stood with the support of crutches and had a full knee brace on his left leg. He looked like a cyborg!  I asked him what had happened and he told me the turf got him.  No one touched him…he had sprained his knee running a route. Nothing more, nothing less…nothing dramatic.  What the mind believes the rest of the body will achieve. For the first time ever, I played scared.  All because of that one singular moment. I should have left the stadium and hopped on a GO Train back to Hamilton then and there.  Everything felt off after that. I had a bad warm up.  I bobbled a couple of passes early on in the game.  I remember telling myself to wake the fuck up before someone tore my head off.  In the 2nd quarter, QB Reggie Slack called a play and based on all of the variables in the moment, I knew I was going to get the ball. I just had to run a great route and I did. Perhaps the best hook route I had ever run in my career. As expected, the passing lane opened up and Slack hit me right on the numbers with the pass. In a bid to avoid a heat seeking missile/Toronto Argonaut defender, I planted my foot into the turf and rather than pivot away to protect myself and the ball that I had just caught, my knee hyper-extended and blew up!  Literally!  To this day, I can still hear the pop!  So could the defender.

Rather than take a moment to develop perspective and re-group, I raced to the operating room and the surgeons scalpel, all in a bid to get back into the huddle. All for a salary of $55,000 before taxes!  As luck would have it, the one thing I do better than play football is build fibrous tissue. My body builds scar tissue. So much so that I endured 3 follow up arthroscopic procedures in a bid to clean the knee up, release the knee cap and increase my ranger of motion. Now I was looking at procedure number 5 and I kind of vowed it would be the last.

“There is a fine line that separates courage and obsession.”

In Chinese, the term Lingchi translates into “the slow process, the lingering death or also known as death by a thousand cuts”.  It is related to a form of torture long outlawed.  I wish I had known this as I lay on the field that day.  For years after that misstep I put myself through my own form of Lingchi.  Little did I know it was the first step in a long, arduous waltz with my devil.  Rather than be a death of a thousand cuts, the dance was a death of a thousand rationalizations and justifications.  With each justification, with each rationalization I became a better dance partner.  A willing dance partner all in a bid to avoid looking at life beyond football.

What doesn’t kill you doesn’t necessarily make you stronger. It just kind of kills you and makes you more comfortable with discomfort.

As they carted me off the field, I knew my life had changed.  The distance between my teammates and I was palpable.  Sure, I knew I was never going to play football forever but I never really thought about life beyond the game until that moment. Every athlete needs to feel invincible. It’s why I would never visit a teammate in a hospital if he had undergone knee surgery. Any other surgery, I would be there with flowers but not knee surgery. I went from invincible to invisible in the blink of an eye.

In what is a tad ironic, two weeks before I blew out my knee I sat down with pen and paper and attempted to look at life beyond football.  I was going to build my resume.  The idea was inspired by my taking time to clean my one bedroom rental.  As I cleaned up I found little brown packets.  Two by my bed, 3 in the kitchen, 2 in the couch cushions and a single packet in my gym bag, another in my shaving kit.  Within the packets were tablets. Toradol, percocet, naproxen and Tylenol 3’s.  Toradol was my favorite.

If you look it up toradol is described as “a short term treatment of moderate to severe pain in adults.  It is traditionally prescribed before or after medical procedures or after surgery.  Reducing pain helps you recover more comfortably so that you can return to your normal daily activities”.  Well, when your normal activities include getting run over by guys who take great pleasure in running people over, toradol was the perfect dance partner.  At that moment, I was both excited and horrified.  Excited that I found a stash and horrified that I was excited about finding a stash.

It was my scared kind of straight moment. It was time to consider my next life chapter.  As I began to write out my resume, the panicked set in.  I immediately realized that if anyone wanted to hire someone who, on 2nd down and 10 with time winding down, could adjust his route in a split second against a safety blitz, catch a ball in the red zone with a guy zeroing in on him with the single minded goal of wiping him out, then I was your guy.  Regrettably, most HR Managers were not hiring anyone with those particular skills in mind.  It was then I first felt an overwhelming sense of worthlessness.

Despite waking up each morning feeling like I had been in a minor car wreck, I kept the chips on the table and opted to let it ride.  I adopted an “it’s better to burn out than fade away” ethos. I convinced myself that sacrificing my body and mind for the game was a fair trade off with the football gods.  Almost heroic! My hips were misaligned, I had torn rib cartilage the season previous, broke a couple of transverse processes in my back, suffered concussions, recovered from a torn quad that was not diagnosed until an attempt to drain fluid in my knee revealed blood instead.  In addition, thanks to a helmet to the elbow earlier in the season, I had a bursa sac that when touched, would send lightning bolts through my arm.

To this day, I kind of believe I touched the 3rd rail on the train tracks and roasted myself.  By playing host to the mere idea of preparing for life after football, I sub-consciously set myself up to fail.  I created a chink in my own armor.

So, there I lay in the operating room desperate to feel safe in a game that was not safe.  I yearned for comfort in a game that used competition to keep players uncomfortable.  I wanted to feel a connection, an assurance that my devil could provide but I bought into a lie.  The not so funny thing is, as the anesthesiologist sent me to la-la land, simplicity ruled.  A new clarity entered from the fog.  For a brief moment I admitted to myself that I didn’t love the game anymore.  For a brief moment, I admitted that I hated the game.

The procedure, like the previous three, did not succeed.  I registered for a computer programming diploma course.  Now, nothing about me screams computer programming.  It was a $17,000 mission failure.  Funny thing is they gave me a diploma for coding.  I think the instructor felt guilty and created it on his home computer using clip art.  I tried on a suit that fit so many others but did not fit me.  Not even close.

At that time, a desperate Hamilton Tiger Cat team called a desperate Ken Evraire.  Can you run?  I sure can!  Can you help? I sure can!  I would have said anything to get my fix.  The devil asked me to dance again and my being a Ballroom Dancing World Champion, I could not wait to hit the dance floor.

Why did I go back? Why did I not leave it all behind?  Like almost all long term, dramatic, emotional relationships, breaking up is tough.  Neil Sedaka was right when he sang, “breaking up is hard to do”!  So tough that we do all we can to avoid heartache. We try to work it out. We rationalize. We compromise all in a bid to stay in the same space or go back in time to when things were good.

This approach stands in direct opposition with our DNA and our need to dance with many partners that make our life chapters. Dance without giving up ownership. Change roles and take the lead!  Fill your dance card.

The 1st stage in the 4 Stages of Learning is Unconscious Incompetence.  Essentially, we don’t even know that we don’t know.  At first blush, the term incompetence is negative in nature but if you look at it from a different perspective, a perspective of birth…of a new beginning, the term becomes our start line.  We do not magically master something overnight.

We work our way from stage 1 to stage 2 (Conscious Incompetence) where we acknowledge that we don’t know, that it is okay and then begin the work of knowing.

Then we make our way to Stage 3 (Conscious Competence) where we begin to hone our craft on our way to mastery.

Once we have mastered the skill we have made our way to Stage 4 (Unconscious Competence) where we can perform the skill without thinking.  Then we repeat the process with a new challenge in mind.

Once you ascend a mountain you don’t stop climbing.  You look for a bigger, taller mountain!

“Transition always starts with an ending. To become something else, you have to stop being what you are now; to start doing things a new way, you have to end the way you are doing them now; and to develop a new attitude or outlook, you have to let go of the old.”

Dancing with the same Devil over and over again forfeits your growth.  To give birth to something new…something must end.

We are all going to dance. Find the right partner and when you do take the lead?