It was the summer of 2001. Team Canada’s Olympic training camp began in Ottawa at Ottawa U.  A who’s who of media types were on hand including yours truly (who was not part of the who’s who club!).

I took a seat in the front row of the press room like a kid looking forward to the first day of school.  I was going to get straight A’s this year!  Honor roll here I come!  This one was going on my demo tape!

The Team Canada Olympic Team brass entered the room and made their way to the stage and after a brief review of press conference instructions from the media rep, the floor was opened for questions and, like everyone else in the room, I raised my hand.

As luck would have it, I was selected first. I had a great question for Team Canada Executive Director, Wayne Gretzky.  I was going to set the tone! With one question I was going to trigger an in-depth, thought provoking, life changing, symbiotic dialogue between The Great One (TGO) and Kenneth Russell Joseph Simon Maurice Evraire Jr. (KRJSMAJ)! A question that would lead to a lifelong friendship. He would call me by my nickname (Cowboy) and I would call him Gretzk or Wayner!  All because I had a question that no one in the room would have thought of but would all would go on to poach for their stories.

Boy, was I wrong! On all counts!

I asked, “With a roster filled with star players, the worlds best, will it be difficult for some of them to adjust to 3rd line and 4th line roles and less ice time?”.

He pondered my question for a millisecond then responded, “No, they are the best players in the world and if they can’t adjust, they wouldn’t be here.”

Ta-da!  There it was.  Short and sweet.  Nothing more, nothing less!

The media relations guy took the mic from me and gave me a look that reminded me of the Soup Nazi character in the series Seinfeld. “No more questions for you!”.  I could almost hear the rest of the media throng mumbling “what an idiot!”.  Back to media 101 summer school for me!

All I could do was sit there and pretend I was completely intrigued with all of the other questions and answers shared during the presser, when in truth, I just wanted to get the heck out of there!  Time just seemed to slow down!  I was pissed. I was pissed because, one, I thought I had a great question,  two, I thought it warranted a longer answer and three, I thought..no wait, I knew The Great One was wrong!  I had been in a room filled with pro athletes before.  Adaptation and the ability to change is key to any success.

My football instincts were telling me to crack back block the crap out of WAYNER when he left the stage. (Wayner…what a dumb-ass nickname!). Yep, the solution was to just ear-hole his hockey playing, Jofa helmet wearing, frosted hair tips attitude then and there.  Dave Semenko isn’t around to protect you now pal! Call Mark Messier and I will call Darren Joseph.  Shout out to Marty McSorley, I will make a toll-free call to Glenn Kulka!

If you google search “football player ear-holes the greatest hockey player ever” you won’t find anything because after taking a couple of deep breaths, I chose to take the high road and keep my emotions in check.  Why? Because I knew I was right.  Talent doesn’t always win out. The ability to adapt does.

It took some time (approx. 6 months)  but I was eventually proven right.

On February 18, 2002, Gretzky lashed out at the media at a press conference, frustrated with media and fan comments regarding his team’s uninspiring 1–1–1 start in pre-Olympic Games exhibition play.  He would go on to say his rant was designed to protect his team as they adjusted and worked to become a gold medal winning team.

I jest when saying The Great One lied to me but the fact of the matter is, any roster including a team made up of the world’s greatest players, needs time to adjust to new roles.  Head Coach Pat Quinn had to find those players within this all-star roster willing to change their game.  He had to find a new set of strengths within a number of players that would translate into success.  As good as the players were, Quinn and his staff had to do some serious coaching. Team Canada didn’t just show up and dominate.  They had to earn their title of Olympic Champion the hard way.  I think that is part of the reason why the 2002 Salt Lake City Olympic Games gold medal meant so much to so many and continues to, to this day.

Every team will need to adjust….it’s inevitable. This truth applies to sports teams, small businesses all the way through to Fortune 500 companies.

When watching a best of 7 playoff series be it in hockey, basketball, baseball etc, the ability to overcome the physical challenges combined with being able to counter punch from a strategic perspective is everything.  The margin for error is far greater in the playoffs versus a regular season game because the teams see each other every second night.  The differences between the teams become so finite thanks to the in-depth understanding of the opposition.  The same applies to the business sector. Everyone is competing for their piece of the pie.  The tide can turn at any time. Being able to adapt is key.

No matter how talented your team is, the need to adapt and overcome, the need to expect and accept evolving roles in a bid to succeed as a team is all part of the experience.

Ken Evraire is an award-winning leadership coach and team builder. As a former professional athlete, he has learned from great coaches and learned even more from the bad ones! When not coaching up, he is busy producing documentaries and chasing his 3 precocious children! 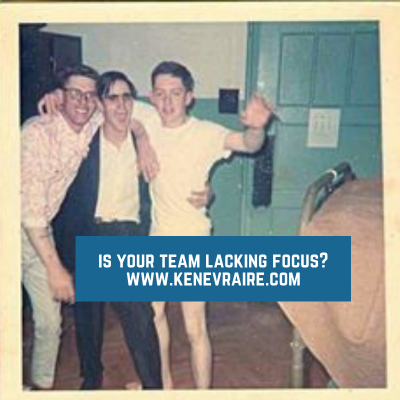